About the distance to the stars

Those who have read Chapter 23 of my book will know that the TYCHOS model posits that the stars are far closer (about 42633 X) than currently believed. In this post, I will demonstrate the utter absurdity of the enormous star distances estimated by the Copernican advocates.

Our nearmost star Proxima Centauri is reckoned to be about 1/7th the size of our Sun. It is considered to be a “red dwarf star” (red dwarfs are the most common stars in our universe and are notoriously quite dim - oftentimes so dim as to be invisible in our best telescopes).

To put this into perspective, my below graphic shows how an object 100 X smaller than the Sun would look like - in our skies. Now, imagine if that little dot wasn’t only 100 X smaller (as in the below image) – but as much as 2 MILLION times smaller… Give it a good thought - and let it sink in for a moment… 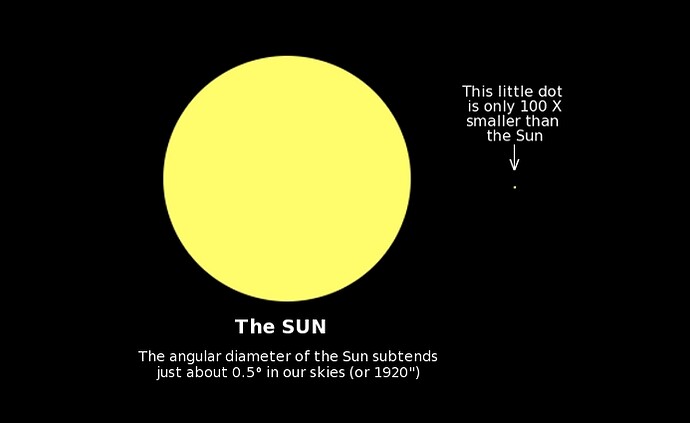 So the question becomes: if that little dot were 2 MILLION times smaller than the Sun (which only subtends a mere 0.5° in our skies), HOW - pray tell - would it possibly be visible from the Earth at all ? Can your mind even remotely conceptualize such a possibility? Oh wait, could it be because Proxima is an exceptionally bright / luminous star? Well, no - not according to officialdom… Here’s what we may read on the Wikipedia:

“(Proxima’s) total luminosity over all wavelengths is 0.17% that of the Sun, although when observed in the wavelengths of visible light the eye is most sensitive to, it is only 0.0056% as luminous as the Sun.” Proxima Centauri - Wikipedia

In other words, we are asked to believe that Proxima, our very nearmost star…

Yet, in spite of all this - Proxima is still readily visible (telescopically) from Earth !

Well, the Copernicans have come up with all sorts of excuses for this (e.g. ‘lens diffraction’ / Airy Disk / etc.) which I will cover in my next post here - but this is all for now, folks!

I’m sorry I jumped ahead in ch 23, please let me know if I have this right or not:

"This will be our reduction factor for all the stellar distances listed in official star catalogues.**

This also means that, in the TYCHOS, the distance unit known as “1 Light Year” corresponds to less than 1.5 AU :

Firstly, welcome to the forum.

Yes, precisely: what is currently called “one light year” would - under the TYCHOS paradigm - correspond to a distance of about 2,219,166.4 km.

Does this indicate that the stated velocity of c is erroneous or is there a different take away here?

Good question, dear schoepffer. However, I really do not pretend (at this time) to have an answer to that question. Nevertheless, in Chapter 24 of my book, you may read about the diurnal variation of “c” - as detected by several interferometer experiments - by Dayton Miller et al. As it ‘happens’, this diurnal variation of “c” appears to be congruent with my proposed translational speed of Earth.