Dear all,
This most recent (March 2022) article to be found at the Science News website is of paramount interest to one of the TYCHOS model’s core contentions, namely that ALL (100%) of the stars in our skies are binary. I will just mirror the entire article here for the record - lest it gets ‘scrubbed’ from the www in the future: 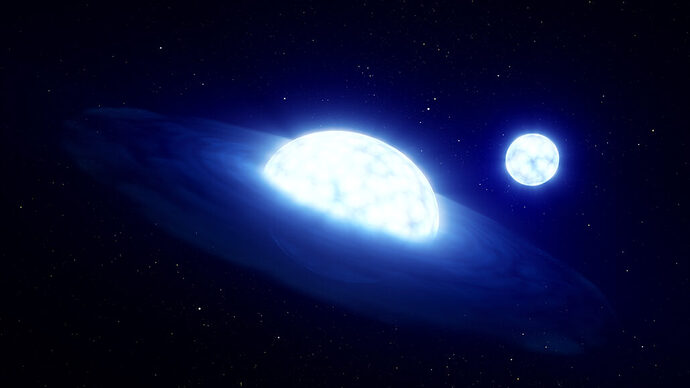 1030×580 37.7 KB
“The star system HR 6819 (illustrated) hosts no black holes, as previously reported, but instead two blue stars, one that recently siphoned gas off the other.”

"The nearest black hole to Earth isn’t a black hole at all. Instead, what scientists thought was a stellar triplet — two stars and a black hole — is actually a pair of stars caught in a unique stage of evolution.

In May 2020, a team of astronomers reported that the star system HR 6819 was probably made up of a bright, massive star locked in a tight, 40-day orbit with a nonfeeding, invisible black hole plus a second star orbiting farther away. At about 1,000 light-years from Earth, that would make this black hole the nearest to us (SN: 5/6/20). But over the following months, other teams analyzed the same data and came to a different conclusion: The system hosts only two stars and no black hole.

Now, the original team and one of the follow-up teams have joined forces and looked at HR 6819 with more powerful telescopes that collect a different type of data. The new data can make out finer details on the sky, allowing the astronomers to definitively see how many objects are in the system and what type of objects they are, the teams report in the March Astronomy & Astrophysics.

“Ultimately, it was the binary system that best explains everything,” says astronomer Abigail Frost of KU Leuven in Belgium.

Previous observations of HR 6819 showed it as a unit, so astronomers couldn’t differentiate the objects in the system nor their masses. To nail down HR 6819’s true nature, Frost and colleagues turned to the Very Large Telescope Array, a network of four interconnected telescopes in Chile that can essentially see the separate stars.

“It allowed us to disentangle that original signal definitively, which is really important to determine how many stars were in it, and whether one of them was a black hole,” Frost says.

The scientists think one of the stars is a massive bright blue star that has been siphoning material from its companion star’s bloated atmosphere. That companion star now has little gaseous atmosphere left. “It’s already gone through its main life, but because the outside has been stripped off, and you only see the exposed core, it has similar temperature and luminosity and radius to a young star,” says Kareem El-Badry, an astrophysicist at the Harvard-Smithsonian Center for Astrophysics in Cambridge, Mass. El-Badry was not involved in the new study, but he suggested in 2021 that HR 6819 is a binary system.

This siphoned star’s core color and brightness could fool astronomers looking at the older data into thinking it was a young star with 10 times as much mass. It originally appeared as though this star was orbiting something massive but invisible — a black hole.

Once the researchers unraveled the system’s details, they realized this system is a unique one, showing astronomers a phase not seen before among systems with massive stars. “It is a missing link in binary star evolution,” says astrophysicist Maxwell Moe of the University of Arizona in Tucson, who was also not part of the new study.

Astronomers for years have seen binary systems where one star is actively pulling gas off the other, and they’ve seen systems where the donor star is just a naked stellar core. But in HR 6819, the donor star has stopped giving mass to the other. “It still has a little bit of envelope left but is quickly contracting, evolving to become a remnant core,” Moe says.

Frost and her colleagues are using the Very Large Telescope Array to monitor HR 6819 over a year to track precisely how the stars are moving. “We want to really understand how the individual stars in the system are ticking,” she says. The team will then use that information in computer simulations of binary star evolution. “[It’s] exciting to now have a system that we can use as kind of a cornerstone to investigate this in more detail,” Frost says.

Even though HR 6819 doesn’t have the nearest black hole to Earth, it appears to have something more useful to astronomers."

In short, what was previously believed to be the nearmost black hole to our solar system turned out to be no more than a (poorly understood) binary system. This neatly goes to support the TYCHOS, insofar as it stipulates that ALL the stars in our skies (without exception) have a binary companion. According to the Copernican theory however, our own star (the Sun) would thus be the one-and-only SINGLE / NON-BINARY star in our entire Universe - a most absurd and illogical contention, if there ever was one! Of course, the TYCHOS model submits and demonstrates that Mars is the binary companion of our Sun.

Here’s the link to a follow-up article on the Science News website (of April 2022) which further suggests that “black holes” are no more than illusory (i.e. non-existing) entities :

BINARY STARS KEEP MASQUERADING AS BLACK HOLES
" What scientists thought was a star orbiting a black hole turned out to be two stars instead" https://www.sciencenews.org/article/binary-stars-black-hole-astronomy#:~:text=What%20scientists%20thought%20was%20a,is%20actually%20a%20second%20star.