In chapter 21 of your book you write: “Since Earth also spins around its axis every 24 hours or so, it follows that the path traced by a man (standing still for a full year) will be a trochoid” with the following accompanying image: 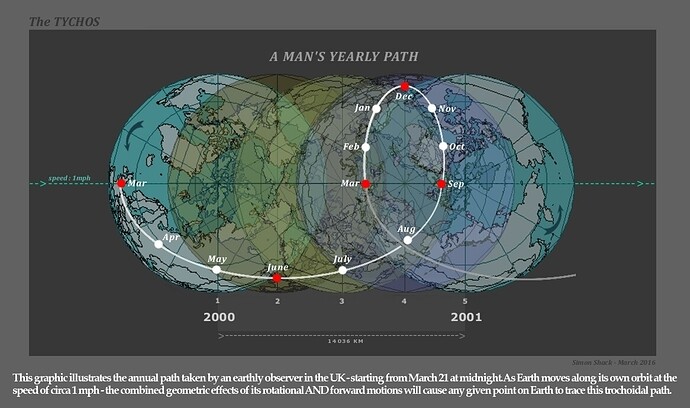 I’m somewhat confused: how exactly does the Earthly observer’s frame of reference form a [prolate] trochoid (a loopty loop)?

I’ve read or heard you say that the motion of a light on a bicycle wheel creates a prolate trochoid, but to do so the light would have to be fixed outside the circle of the bicycle wheel which is physically impossible against a road surface. 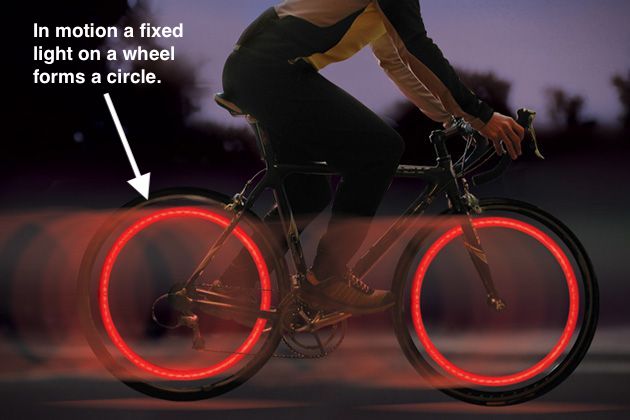 In the first image above from your book, ‘Jim’ (the Earthly observer), who is standing at a fixed position on Earth as viewed from above the North pole, is not moving, yet in the duplicated Earth images he appears as if he is changing geographical positions from month to month (in March at or around London, in April at or around Moscow, etc.). I am sure his apparent geographical location is unimportant, so I am trying to understand how this looping frame of reference works.

I can imagine a prolate trochoid motion produced from a fixed point located outside a rotating circle and with the horizontal motion equal to the rotating circumference motion (as in the above gif), but in your yearly PVP Earthly motion example this is not so: the Earth is rotating sort of in place (about 365 times), and only moving, according to the binary geo-heliocentric model, a little more that once its diameter, as in the below image from your book:

I haven’t found any experimental demonstration of a rapidly rotating / very slowly moving circle with a fixed point of light that could help conceptualize your model.

you may wish to check out this trochoidal animation machine (by Lenore Horner):

You will see that a trochoid will indeed occur just as the TYCHOS model proposes.

I wish to thank you for submitting your above question. I have now added a new graphic (see below) to Chapter 21 of my book which should definitively clarify this matter. See, the manifestation of a prolate trochoid (by a dot placed on a spinning ‘wheel’) primarily depends on these two factors:

Since Earth moves about 1000X slower than it rotates, a man standing at the ‘edge’ of the Earth (i.e. at the Equator) will indeed trace a prolate trochoid over a full year: 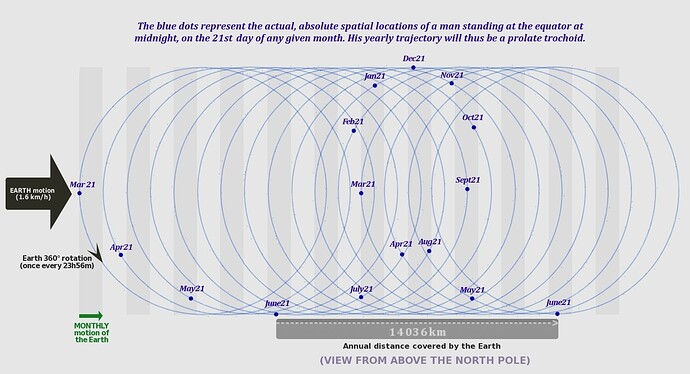 You can actually verify this for yourself at home in this simple manner:

Take a standard, 12-cm CD (compact disk) and draw a dot on its edge.

Thanks for your answer; your helpful diagram is precisely what I was conceptualizing in my mind.

So what is this monthly 30 degree Earth orientation shift? How is Earth “shifting” by 30 degrees every month? Sorry, this is where I don’t get it.

Here’s how you can verify this - with your own eyes

: go to the Tychosium 3D simulator , center the Earth in your screen and enlarge the view as much as you wish (by using your mousewheel). Next, select “1 second equals 1 DAY”. Now, click on the “step forward” button and you will see that, each day, the Earth ‘ticks counter-clockwise’ by a small amount. If you now select “1 second equals 1 MINUTE”, you will see that by clicking on the “step backward” button 4 times (i.e. 4 minutes), Earth will return to the (rotational) position it was the day before.

Hence, every 30 days or so, the Earth “ticks counter-clockwise” by about 30°.

Here this is also explained, see question 6. And regarding this question, it doesn’t matter if we think it’s the Earth that moves around the Sun even though this is geometrically impossible as explained in Simons book, or if the Sun is orbiting Earth.
Questions.

I am also trying to wrap my head around this. I think there are several, different ways of gaining an understanding, and I think Simon’s example with a CD disc is excellent!

This might be another way of thinking?: In the TYCHOS the sun makes a full orbit around earth in 12 months. That’s 360/12= 30 degrees, or 1440/12= 120 minutes, per month. That’s about one degree, or 4 minutes per day. If we draw a straight line from the center of the sun to the center of the earth, this line will hit earth in the exact same longitudinal position the exact same time each day. But the latitudinal position will ofcourse vary from day to day, since the earth is tilted about 23.5 degrees compared to the sun’s orbital plane. So, for someone standing on earth at the exact same longitud and time each day, the sun will be at the same longitud compared to earth. But the sun will move 4 minutes per day Right Ascension (longitudinal position in the celestial sphere). In other words, earth is “following” the sun so to speak, as it orbits around earth.

This is my understanding anyway. I hope it might be of some help to somebody else trying to understand this concept

But please correct me if I have misunderstood something.

Yes, you’ve got it right - but this particular issue is solely about celestial longitudes (RA / Right Ascension), so no need to complicate matters with celestial latitudes (DECL / Declination). 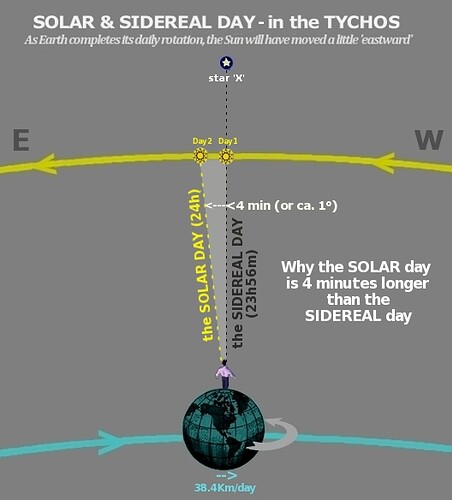 You got it right Timo. The Earth has to rotate a little bit more than 360 degrees to line up with the Sun since it’s moving around us. And thanks to having built the Tychosium I get this throughly now.

And there’s another interesting phenomenon related to this. Even though our 24 hours represents precisely the time it takes for Earth to rotate about 361 degrees to line up with the Sun, the Sun will not be exactly at the place it was yesterday at noon. Most of the times it will be slightly behind or in front of that position. This phenomenon is called the analemma and until Simon took a good look at this, no reasonable explanation existed to why this occurs. But with the PVP orbit that Earth slowly moves in while the Sun orbits Earth, a simple and rational explanation to this phenomenon can be found. During the summer season, Earth will be moving slightly in the opposite direction that the Sun is moving around us in. And in the winter season it will be moving in the same direction in it’s PVP-orbit as the Sun. If you hold your right finger in front of you, moving it slowly to the right imagining it’s Earth, while at the same time having your left finger making a counter clockwise circle around “Earth”, you can see how this works. This is however only the basic cause of the analemma. The reason it is shaped as a disfigured eight has to do with “A mans yearly path” and is explained in detail here Chapter 21: A Man's Yearly Path - and the Analemma

I stumbled onto this trochoidal pattern myself. Using CAD I drew a circle representing earths orbit and a small one representing the moons. The moon’s circle is divided with 28 ticks, of course earths circle would have 365. Put the moons circle center point on the larger diameter earth orbit. Day one, the moon is directly in line with a line going to the center point of eath’s orbit. Move (or copy in CAD) the small circle one tick mark/day, while at the same time changing moons position each time. So the earth moves 28 days around while the moon is moving in its circle around the earth. I know it is convoluted in words but the trochoidal patter begins to appear just like Simon’s graphic.

I was making a calendar for myself with the earth rotating around the sun, then I found Tychos model. The remarkable thing is this, you can use a scaled down orbit with metric, just drop the zeros and it works out. Except, you have to make earth larger or you would never be able to see it. But then I did the math and earth is moving (based on mainstream) ~201 earth diameters/day! And making a single rotation, talk about a knuckle ball! If you use that distance for your earth moon exercise above, the trochoidal pattern will never appear. It makes no sense to think that we are dragging along the moon while it is slowly moving each day around us, over 200 earth diameters every 24hrs! Absolutely nuts… I mean with the moon so close to us you would have to see some parallax if earth moved 200 diameters/day it seems to me.

If you use a bb as earth, a 20" beachball is approximately in proportion to the sun’s size. I was going to compare the distance earth moves every day and I got about sixty bb’s laid out and I said “screw this!”, it wasn’t worth the effort. But for the sun (beachball) to travel the same distance, you just roll the beachball one revolution!