Hello,
Here is another question for you. I hope my questions are not to sophomoric for this forum.
There has been a lot of speculation about the source of the Taurids meteors being responsible for a possible Younger Dryas impact event. An event that would have helped to cause the great changes of that period. There are many versions of this line of thinking, here is an example:
Taurids Meteor Stream Could Cause Disaster To Earth - Antarctica Journal

In the TYCHOS we know that the earth is not flying around encountering meteor streams. As i understand it these meteor streams are debris that is in the wake of the Sun or Mars, or something like that.
My question is have you have the time to look at the comet Encke and the possibility that it or its comet stream, what ever that may be, encounters Earth every Nov and June?
Thanks.

The earth is flying tho… Evrything moves and everything rotates…

Very true Gnostic Troll.
The earth spins and has its slow orbit. but at one mile per hour does not seem to be bringing us in contact with a huge amount of cometary debris.
according to WikiP. the Galactic Year also has us moving at some huge speed around the galactic center.

" The galactic year, also known as a cosmic year, is the duration of time required for the Sun to orbit once around the center of the Milky Way Galaxy.[1] One galactic year is 230 million Earth years.[2] The Solar System is traveling at an average speed of 230 km/s (828,000 km/h) or 143 mi/s (514,000 mph) within its trajectory around the galactic center,[3] a speed at which an object could circumnavigate the Earth’s equator in 2 minutes and 54 seconds; that speed corresponds to approximately 1/1300 of the speed of light.

I wonder, and perhaps doubt, if this movement can be seen in the movement of our galaxy’s stars against the background of other galaxies, but that is a different question.

Hi MUU
That this or any other meteor storm caused or was part of the impacts that occurred during younger dryas is speculation. And if I may speculate on this in the light of Simon’s Tychos research, Halley’s comet has a speed and an orbit in the Tychos that makes it likely that it’s an ejecta from the Sun. And if that is correct, we could reason that Halley’s birth may have lead to one or several cataclysmic events on Earth if part of the comet or other ejecta impacted our planet.

Howdy Patrik
I agree that it is indeed possible, Simon’s work on Halley’s very interesting and even enlightening.
My question regarding Encke, if Simon has even looked at it, would be to look for similar type evidence from its orbit, if it even exists…

I believe many of the explanations for how things work are speculations, or, outright lies. Let’s speculate.

And as a side note: I have been watching (using) the Tychosium over the last months as Mars came into opposition etc., and playing with the simulator a lot. It too is enlightening. I am thankful that you have made it. Thanks again for all your hard work.

Thank you MUU. It really means a lot and work is underway to build an even better Tychosium.

Regarding speculation I’m all for that as well, but it needs to be done with at least one foot on the ground and it’s disturbing how little this is respected in the alternative community. They often build up far fetched theories with little support, ignoring more reasonable explanations. And I think much of it is per design. The devil’s best trick is to have lies fighting each other, so when we discover something is off with the mainstream narrative and we therefore seek alternative explanations we are at risk of finding yet another lie.

Regarding ancient civilizations and lost technology I can recommend the YouTube channel SGD Sacred Geometry Decoded. This guy highlights that a lot can actually be accomplished using primitive technology, so we don’t always need to invoke lost technology or worse Aliens when investigating megaliths etc.

Patrik, I look forward to the New Tychosium. Are you looking for help with it? I know someone who may be able to help.
Your response calls to mind the argument that my friends who know “Science” say about the TYCHOS… it being a waist of time because all of science has come to accept the Heliocentric model. They say the tychos is just a diversion by a known conspiracy theorist and is just a red herring.
They have careers. I don’t know where to draw the line, so i look at it all. i am playing out these battles with the devil in my head. some things like FET for instance are clearly B.S. other things like the TYCHOS seem to check out. and i am no expert. i have no reputation to uphold, no career to defend, and no money to either loose or gain. so my questions are not that important. just questions i have because i am not a astrophysicist or even a scientist in any way. i am a frolicking artist.( LOL. frolicking was substituted by the computer for a different f word.) I don’t even think i can frolic anymore, but i am stoked that Simon’s model w/ the PVP orbit, is so correct and answers so many questions.
I hope my question about the Encke doesn’t get lost in all this extra stuff.

I don’t even need to discuss ALL the other BS out there.
Thanks again

I have indeed been (briefly) looking into comet 2P/Encke - and am planning to integrate it into the Tychosium simulator in the near future / as time permits (and pending some further research into Encke, famous for being our shortest-period comet: it returns roughly every 3.3 years).

In the meantime, you may wish to read this 2019 study regarding Encke’s purported relationship with the Taurid meteor streams (spoiler alert: astronomers appear to be rather confused by it all!)

So far though, I have noted one interesting aspect about Encke: namely its “81-year period”:

“Encke’s pole tumbles in an 81-year period, therefore it will accelerate for half that time, and decelerate for the other half of the time.” Comet Encke - Wikipedia

Well, as mentioned in Chapter 29 of my book, asteroid Eros also has an 81-year period (or more precisely, an 81.1-year period) in which it returns closest to the Earth (note that both Eros and Encke can pass as close as 0.16AU or so from Earth). Huh? Our most famous ASTEROID and our shortest-period COMET share the same long period (of 81 years) and both transit at similar perigees (i.e. close transits from Earth) ? Curious, isn’t it?

For now though, let’s leave this at that. In due time, I will be taking a closer look at comet Encke.

Hi folx! Long time no chat since the Stellarium email thread with Paul (which Simon and Patrix “won” it seemed to me).

Without diluting the topic, I want to submit the idea that there is something fishy going on with NASA’s reports of comets. In this video, the person we are familiar with who goes by Crrow777 (famous for starting many observations of “lunar wave”) has pointed his equipment right where NASA said the comet ISON was supposed to be, only to observe nothing. Regardless of what you think of his videos, I find this an intriguing point.

It reminds me of the times the ISS doesn’t appear. Or like when people observe it as a glowing ball instead of the implausible (and implausibly fragile) object those amply funded space programs claim it is.

So my questions now extend to the comets. There was supposed to be one flying near recently. Here’s some viewing times. Did we actually see it? Was it just where they said? 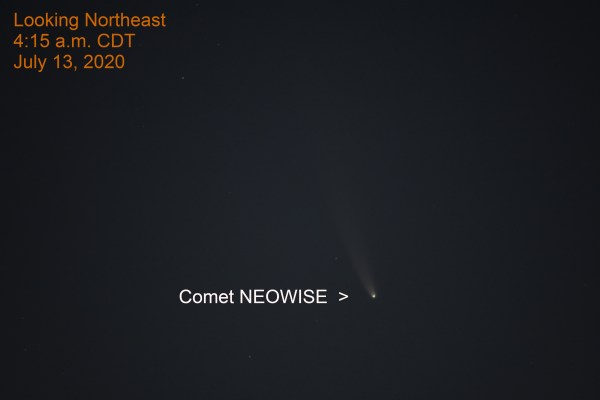 January 22-29, 2023:  A comet is visible through a binocular during the next week all night in the far northern sky moving from night to night between the Dippers.

Congratulations on advancing TYCHOS so far. Happy New Year everyone!