The thumbnail looks exactly like what you’d see from the TYCHOS simulator, and the wishy-washy explanation comes off as a preemptive sandbagging of heliocentrism against TYCHOS, even though TYCHOS is not mentioned by name. So maybe its better to call it a “pre-boonking” video.

The main talking point is: “technically the earth can be the center, but thats just a shift of the coordinate system”.

Thanks for the heads up regarding that video by the popular “Science Asylum” Youtube channel.

At one point of the video though, the host - “Nick Lucid” - shows his ignorance regarding the retrograde motions of Mars. He says: “At VERY REGULAR INTERVALS, Mars backtracks a little before continuing on its way”.

Well, Mars certainly does not backtrack / retrograde at “REGULAR INTERVALS”. Instead, what is observed in reality is that Mars retrogrades at quite IRREGULAR intervals - and by variable (angular) amounts. In fact, Mars is observed to retrograde (against the background stars) much more whenever it transits FARTHEST from Earth - and much less whenever it transits CLOSEST to Earth. As it is, this observable and undeniable fact may well be the simplest way of disproving the entire Copernican / Keplerian heliocentric theory!

You see, in the heliocentric theory, the explanation for the fact that our planets are observed to periodically reverse direction (i.e. ‘to retrograde’) goes like this: “as the Earth overtakes a planet (e.g. Mars), it will appear to move backwards due to an illlusion of perspective”. Well, I myself used to accept that explanation - until I realized what follows (please click twice on my below graphic to enlarge it at full screen): 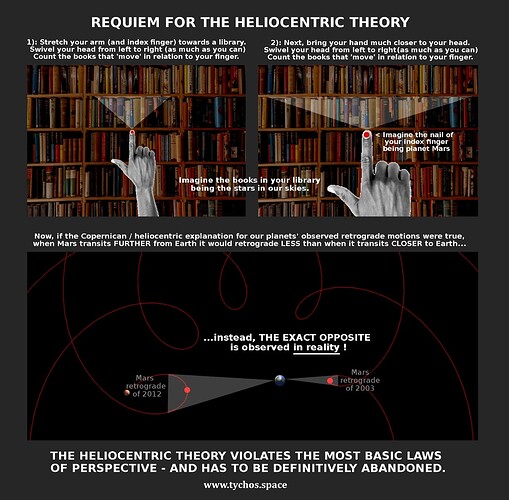 The heliocentirc theory - I’m sorry to say - is dead. The very fact that Mars is empirically observed to retrograde (as illustrated above) completely invalidates its ‘explanation’ for the observed retrograde motions of our planets. The TYCHOS model, on the other hand, is fully consistent with the observed motions of Mars - as shown and traced in the Tychosium 3D simulator.

Needless to say, I will be eagerly awaiting for any direct debunking attempts of the TYCHOS model.

I would like to comment here on Retrograde Motion(RM) as it was the ‘gateway’ to my understanding of The Tychos. It is as if we need a ‘pamphlet’ considering all aspects of RM, which, once digested gives a new outlook on our Solar System.
I, too, accepted the perspective explanation of RM for over 30yrs and was positively shocked when I learnt it couldn’t possibly be the case! But what is for certain is that one has to ruminate over RM for years to get a real grip on all its aspects(maybe this is true only for my limited IQ), it has to be modelled in the mind of man as we don’t have a ‘henge’ or doorway in physical reality thru which to view it as the ancients did in their neolithic landscape. They were able to map in real time against real world objects(the henges) the glorious Fibonacci movements of the planets in RM. This would apply to the Analemma as well.
That Mars is actually swooping in at some hypersonic speed and, without braking, carving out a huge loop in the night sky should send chills down any real astronomers spine… alas, there few real astronomers left!

Interesting video, especially how it leaves out Tycho Brahe. It does matter if we put the Sun or Earth at the center since as explained above a heliocentric model is geometrically impossible.

Needless to say, I will be eagerly awaiting for any direct debunking attempts of the TYCHOS model.

Assuming the establishment is invested in defending dogma over seeking truth, they won’t debunk TYCHOS head-on, it risks making more people aware of the theory. Rather I see them employing rhetoric to make it seem “ugly” & “complicated”, and ‘false equivalence’ as they tried with the “its a matter of perspective”. Then ‘plea’s to authority’ to keep rationally-minded viewers from feeling cognitive dissonance. 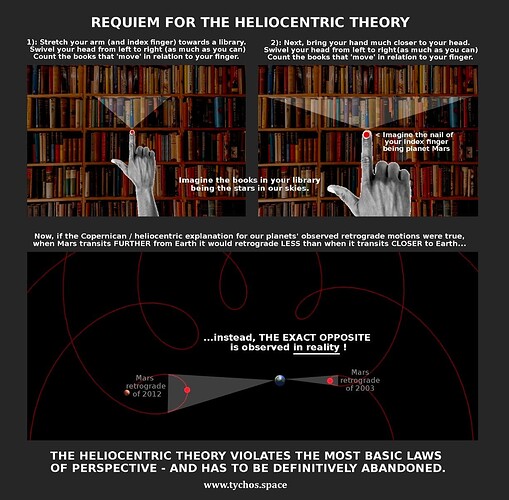 thank you for this diagram, it makes it easier to visualize. Nice for sharing too.

That video didn’t debonk squat. And it certainly did not prove the current scientism trying to explain our universe.
For one, the guy says the idea of geocentrism didn’t occur until Ptolemy. Bullshit. Ancient cultures had that belief long before. Especially the Chinese Taoists.