Toward a non-gravitational explanation of orbital mechanics

We don’t have much to go on, and the tools are limited, but what if the orbits could be explained electromagnetically, instead of gravitationally? If stars, planets, and moons possess electric charge, and if there is an electric plasma current feeding the system, couldn’t it be that the so-called gravitational field is a wave interference pattern, a sort of rotating magnetic field…or something like that? What is needed is a 3-D wave interference simulator, with enough power to handle three bodies.

Hello FSM - and welcome to the forum.

I also welcome your good questions - although I’d like to make it clear (once more) that my TYCHOS model has no pretense, at this stage, to provide some sort of “TOE” (Theory Of Everything") as to the physics, dynamics, forces and mechanics that regulate our Universe. I have just concentrated on figuring out the true geometrics of our SS (Solar System) - using the best observational data available to mankind today - and have shown that the geometry implied by the heliocentric model simply doesn’t work.

With this caveat out of the way, I do however dare say that the TYCHOS model provides overwhelming evidence that indicates that our Solar System is a ‘holistically inter-connected clockwork mechanism’ - what with ALL of its planets’ orbital periods being exact / integer multiples of our Moon’s average synodic period of 29.22 days (which I have called the TMSP - the True Mean Synodic Period). And yes, this would certainly seem to suggest that some (yet-to-be-understood) electromagnetic forces are at play. In fact, in Chapter 16 of my book you will find the below ‘conceptual’ graphic - tentatively titled “The electromechanics of the TYCHOS system” 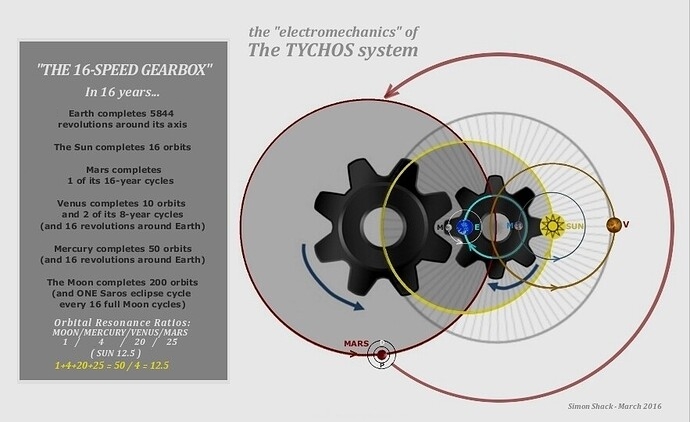 Makes sense. Circular constant speed orbits can be reproduced using magnets as shown in the video in the “Initial thoughts” thread. The Moon could cause tides not because of gravitational pull but because it locally disturbs Earth’s magnetic field.

I found the following three videos while doing a YouTube search on the topic of electrogravity: 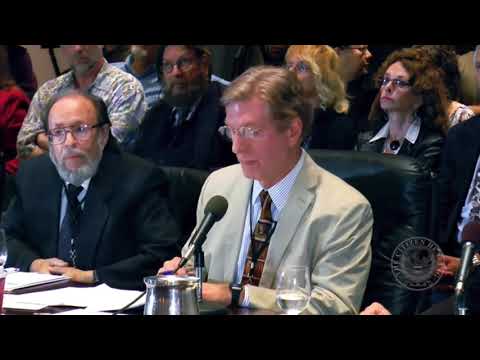 From the first, it may be that gravity is an electrical induction force due to the converging field lines drawing bodies toward the convergence.

From the second, it may be that inertia is an electromagnetic induction force, which resists a change in charge motion.

From the third, it may be that with adequate voltage (caution), an asymmetric capacitor can cause anomalous effects. This would entail perhaps 1,250,000 volts (very dangerous and expensive research).

Interesting, I’ll watch them for sure. Let me share one of my favorite videos that demonstrates that magnetism can be explained with fluid dynamics, which further supports the aether and wave-light theory. 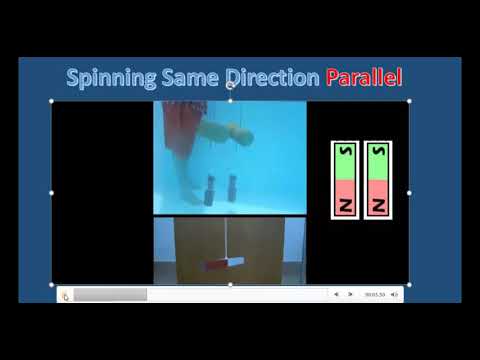 She is interesting. She’s spent a lot of time and effort trying to figure this all out. Not an easy task.

I’ve watched those videos. They where interesting but also problematic since they manifest Einstein and quantum mystics in the background. I don’t give any credibility to that anymore. Einsteins job was to disrupt the physics that put the heliocentric model in jeopardy - Aether physics. And if interpreted reasonably, the double slit experiment still confirms that light is a wave and nothing else 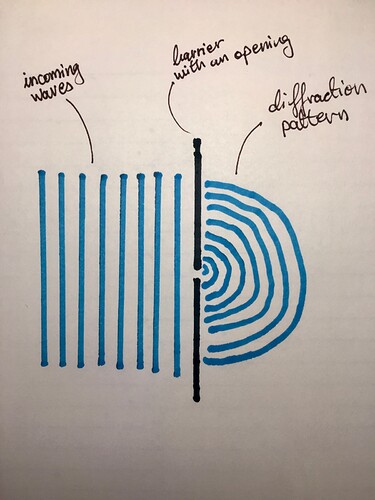 But what is gravity then? My favourite speculation is that its simply a result of “condensing aether”. At the center of Earth a process is ongoing that condenses aether and elements into heavier ones (aether gasses->hydrogen->helium->nitrogen etc). This in turn creates a “low pressure” in the aether since the condensed aether occupies less space. And the equilibrium effect then causes aether from the surroundings to rush in to equalise the pressure. And the constant “aether wind” towards the Earth center is what causes gravity.

Just about all videos that provide helpful information are contaminated to some extent with false ideas like those of Einstein. I learned to read between the lines. I know it is irritating. I force myself to put up with as much of it as I can stand so I don’t miss the good stuff…like that experiment with the aluminum pie plates, for example.